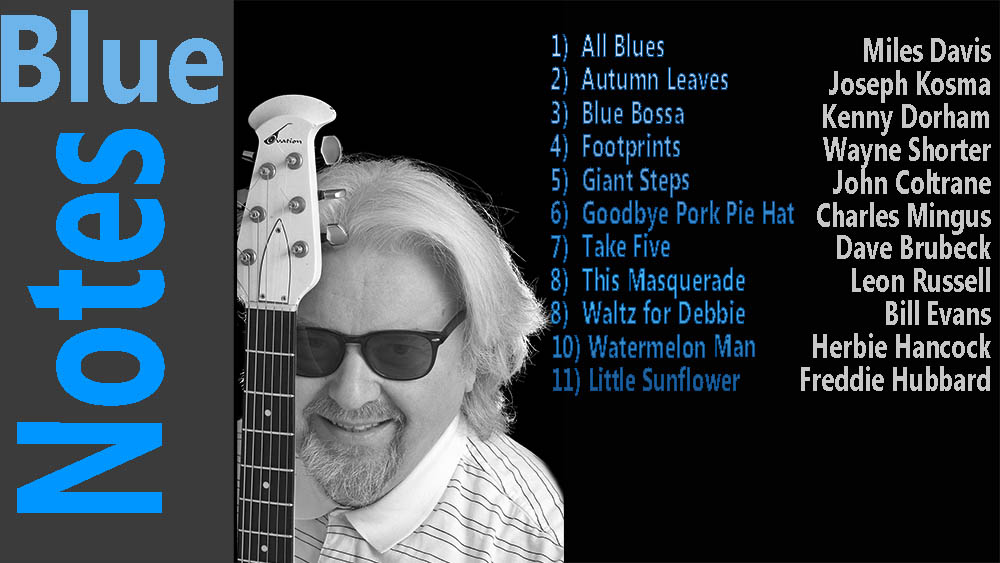 This album 'Blue Notes' celebrates the pioneering Jazz record label, Blue Note Records. Not all the tracks made it onto the Blue Note catalogue yet none would exist without the space Blue Note created for Jazz to evolve. Even if the track was on another album the original artists depped for Blue Note sessions at one time or another. Such was its influence in the jazz sphere.

I have tried to respect the originals but update them to be relevant, an average of 67 years after first release. Jazz must move on or die so I have done some crazy things like adding modern hip hop beats, jumping genres across blues, rock, funk and acid jazz. I've used electric instruments and effects not available to the original artists. Some purists might call it sacrilege but to them I say the phrase Miles coined - So What!

I play most of the instruments (guitar, bass, keys) or write parts into MIDI which triggers virtual instruments, particularly trumpets, saxes, etc. One of the sounds I use on guitar I call High Bass. Someone once said that bass guitar players have no right to be in the upper registers, yet so many (Marcus, Stanley, Jaco) do it so well. I have a few bass guitars but struggle to get the right tone. Imagine my glee when I found that I can put my Nylon stringed electro acoustic through a pedal it gets a great tone that could be mistaken for a fretless bass.

Many of these tracks were arranged by the immensely talented Devian Zakri. He also plays many of the keyboard solos.

For this track I've gone back to my blues roots. The solo starts of very clean but soon descends into wild and dirty rock! All Blues is classic Miles Davis first appearing on the influential 1959 Columbia album Kind of Blue.

This is Autumn leaves as you've never heard it before. It's Autumn leaves on acid! There's a loop mash beat, some crazy Techno stutters, and inappropriate instrumentation.

Originally it was a 1945 French song "Les feuilles mortes" (literally "The Dead Leaves") with music by Hungarian-French composer Joseph Kosma.

Devian Zikri's arrangement updates the bossa nova beat of this Latin Jazz standard. Don't miss the drum solo at 3 minutes 10 seconds. Blue Bossa is a composition by Kenny Dorham. It was introduced on Joe Henderson's 1963 album Page One on, yes you've guessed it, Blue Note records.

My version of Footprints is very modern and could have been written yesterday, not 1996 when it first appeared. Footprints is written by American jazz saxophonist Wayne Shorter who had many albums on Blue Note before going on to found jazz fusion band Weather Report with Joe Zawinul.

This track is composed by Charles Mingus originally recorded by his sextet in 1959 and released on his album Mingus Ah Um. Mingus wrote it as an elegy for saxophonist Lester Young, who had died two months prior to the recording session, and was known to wear a broad-rimmed pork pie hat.

It's been covered by many including Miles (hence the link to blue note), Joni Mitchell, Jeff Beck and other notables. I follow the Marcus Miller arrangement so I'm playing High Bass again.

Take Five is a jazz classic composed by Paul Desmond and performed by The Dave Brubeck Quartet on their 1959 album Time Out. Sadly Dave was on Columbia but undoubtedly influenced by Blue Note. It's another great arrangement from Devian, this time with a samba beat. The melody line doesn't lend itself to the guitar so I have restricted myself to a solo only. See if you can spot a cheeky 4 bars of Techno!

"This Masquerade" is a song written by Leon Russell. It was a top-ten pop and R&B hit for jazz guitarist/vocalist George Benson, who recorded it on his 1976 signature album Breezin'. Neither Russell nor Benson recorded for Blue Note yet I contend that this song, had it been written in the Blue Note era would have found its way into the catalogue. Blue Note is a state of mind as much as a record label!

I've always loved this track by Bill Evans. Bill, as far as I can tell, never recorded his own material on Blue Note but I think he may well have done as a sideman. In contrast to the rest of the tracks on my album I've not mixed it up, I've approached this very simply and traditionally. I don't get to do 3/4 often and appreciate the possibilities when I do. It made for a nice solo played on my Nylon stringed electro acoustic.

John Coltrane, the saxophonist, is another influential Blue Note Artiste. He was certainly a virtuoso player. This track is notoriously difficult to solo over due to having three tonal centres that change almost every bar! I got around this by slowing it down and playing in Pentatonic scales sparingly. It's a great track and I found that doing it in the style of Weather Report worked best. The faux lead bass line is me playing the lower registers of my Nylon stringed electro acoustic again. How do you like my trumpet solo, not a real one, the melody was played into MIDI and used a VSTi enhanced by a breath controller to make it more realistic. It's not 100% but almost indistinguishable from a real horn.

Written by American jazz trumpeter Freddie Hubbard, another Blue Note stalwart. This was my first ever guitar duet collaboration on Soundcloud so who better to do it with than the immensely talented Dan van den Berg. I know, I was a bit skeptical of multiple guitarists too. It probably doesn't occur to guitarists to collab with other guitarists and when we do we stick into comfort zones e.g. Larry Carlton teams up with Robben Ford. So I wanted to do something with a player who is so different it is obvious which of us is playing at any time. I'm pleased to say that I think the contrast of our styles really works. To avoid confusion, I'm the slow/blusey one playing an Ovation electric and Dan is the fast/fusion technical one playing the Ibanez. Dan really thought about this one. He went for a rounded tone and used a setting kind of similar to that of Al Di Meola in his early solo work, where he uses a Phaser with light gain and fast muted lines causing the typical tic toc sound of the guitar.Man I love it, hope you do too! The Vibraphone is by Iman Tjahjono

"Watermelon Man" is a jazz standard written by Herbie Hancock, first released on his debut album, Takin' Off (1962). Cuban percussionist Mongo Santamaría released the tune as a Latin pop single the next year on Battle Records, where it became a surprise hit, reaching #10 on the pop charts. Hancock radically re-worked the tune, combining elements of funk, for the album Head Hunters (1973). My version follows that later arrangement.

It features the immensely talented Keboardist Mark Dorricott on organ. Herbie buffs will understand why there's an interlude in the middle with african sounding pan flutes and bottle blows. This was woven in to the first Headhunters album and later revisited when they briefly reformed 20 years later.